Early diagnosis is an important key for brain tumour patients' survival. The segmentation of the tumour regions is done manually by the experts and it is time-consuming. In this work, we present a novel network architecture that automatically segments the whole tumour regions and intra-tumour structures (edema, enhancing tumour, necrotic and non-enhancing tumour). We evaluated the results using dice similarity coefficient and obtained promising results.

Glioma is the most common type of brain tumour found in both adults and children. Because tumour appearances vary from patient to patient, brain tumour segmentation represents a particularly challenging segmentation problem. Convolutional Neural Networks (CNNs) have become an efficient tool for image classification and segmentation including brain tumour segmentation (Menze et al. 2015). Conventional CNNs consist of convolutional layers, pooling layers and a fully connected layer stacked together to form a full CNNs architecture. A large amount of labelled data is required in order to train CNNs to work well on a specific task. However, in biomedical image classification and segmentation problems, the labelled dataset is limited. U-Net (Ronneberger et al. 2015) which is encoder-decoder network architecture was proposed to tackle this data limitation problem. For brain tumour segmentation, it is important to obtain precise locations of the tumour region. The global and local feature extraction paths from TwoPathCNNs network architecture (Havaei et al. 2016) allow the network to learn different aspects of the input data. These global and local feature extraction paths help to improve the segmentation classes’ prediction accuracy. Inspired by U-Net and TwoPathCNNs networks, we proposed a novel network architecture called Modified U-Net consisting of 3×3 and 9×9 convolutional layers as local and global feature extraction paths.

We trained and tested our proposed model on BRATs 2018 dataset which provides four MRI scans; T1-weighted (T1), T1-weighted with gadolinium-enhancing contrast (T1+Gd), T2-weighted and FLAIR image volumes from 210 high-grade and 70 low-grade glioma patients. These images were resampled and interpolated into 1×1×1 m3 with the size of 240×240×155 (Bakas et al. 2017). We implemented the network using Tensorflow with Tensorlayer library.

We proposed a novel encoder-decoder network architecture based on U-Net that had proved to work well in biomedical image segmentation. We trained and tested the proposed network on BRATs 2018 dataset. Without data augmentation, the proposed model achieved promising results for all tumour regions segmentation and was able to reduce segmentation runtime to just 1 minute per patient. 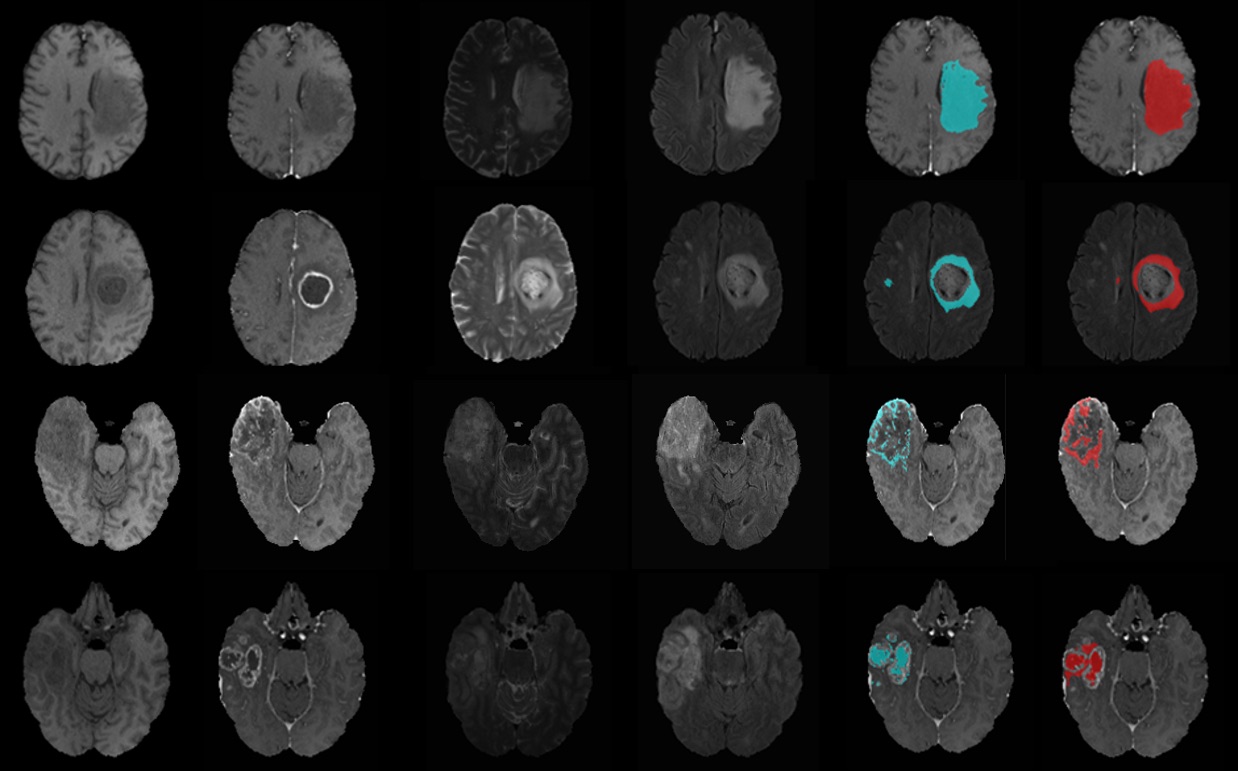 This work was funded through the Development and Promotion of Science and Technology Talents Project (DPST), Royal Thai Government/University of Strathclyde research studentship with support from the NHS and Beatson Cancer Charity.