Investigating a challenge of building a superconducting quantum computer

Parasitic two-level systems (TLS) coupling to a superconducting quantum circuit causes information loss. To mitigate this problem, a better physical understanding of the coupling mechanism is crucial. Phase noise caused by TLS interaction is investigated by using a surface acoustic wave resonator. The results show a significant correlation of resonance frequency fluctuations between different resonance modes, supporting the prediction of the TLS model.

Quantum computing shows high potential to overcome the computational limit of classical computers and offer computational power beyond current state-of-the-art technology. To implement the concept of quantum computing, a reliable fundamental unit of information, the quantum bit (qubit), must be achieved. One of the proposed candidates for qubit that is promising for the transfer from the research field towards real-world applications is the superconducting qubit. Despite having the advantages of scalability and compatibility with existing microwave control systems, the energy loss in a superconducting quantum circuit due to the coupling with parasitic two-level system (TLS) defects remains unsolved. TLSs can be classified as coherent TLS and incoherent TLS. Previous studies, e.g. Burnett et al. (2014), and Müller et al. (2015), showed that coherent TLSs directly couple with a superconducting circuit. Meanwhile, incoherent TLSs interact with coherent TLSs, bringing the coherent TLSs in and out resonance with our system. This effect results in resonance frequency fluctuations. The conventional approach for monitoring TLS interaction is to measure phase noise in either a superconducting qubit or a microwave resonator. However, those devices only allow the study of TLS interaction at one specific resonance frequency. A surface acoustic wave (SAW) resonator has shown its advantage for the study of the interaction between the acoustic field and a quantum device (Manenti et al., 2017). Since an acoustic wave has a much lower velocity than an electromagnetic wave, a SAW resonator contains many resonance modes in limited chip size. This permits the study of the interaction between TLSs in different modes, rather than only one mode inside a microwave resonator.

A surface acoustic wave resonator is utilized as a tool for probing TLSs. A SAW resonator is mounted inside a dilution refrigerator, keeping the temperature approximately at 10 mK. A multi-frequency lock-in amplifier (MLA) connected with a frequency mixer generates high-frequency signals corresponding to SAW resonator frequencies simultaneously. The reflected signals from the resonator contain phase noise, which is the effect of TLS coupling. Phase noise data are used to calculate resonance frequency fluctuations for each mode. Then, the correlations of the resonance frequency fluctuations between different modes are determined. A script for measurement is written in python. A CircleFit notebook (Probst et al., 2015) is utilized for fitting resonator parameters. Finally, data analysis is performed using Matlab and python.

This work experimentally demonstrates that phase noise in different modes is correlated, providing the evidence of interaction between incoherent TLSs and coherent TLSs as the cause of this phenomenon. 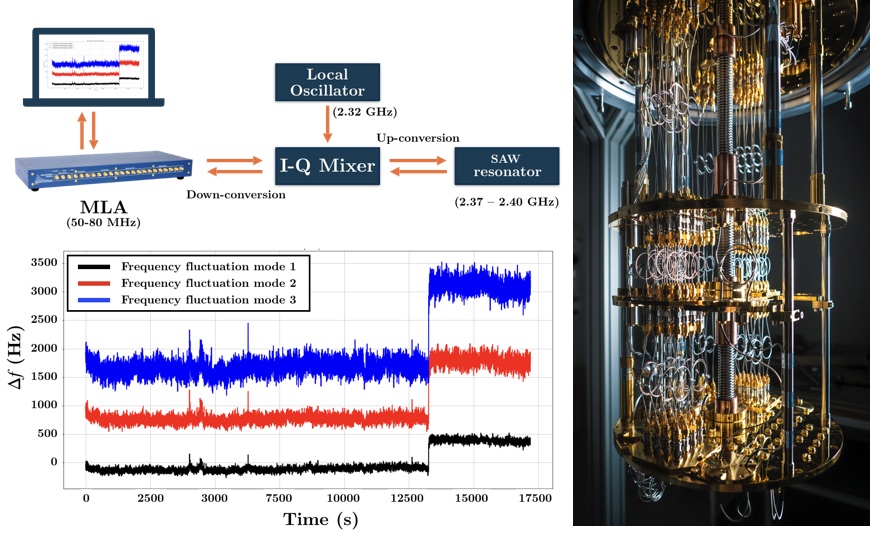 Ms Nuttamas Tubsrinuan is an Erasmus Mundus Master student of Nanoscience and Nanotechnology, specializing in quantum computing. She is studying in the joint-degree program between KU Leuven, Belgium and Chalmers University of Technology, Sweden. This work is conducted under the supervision of Gustav Andersson and professor Per Delsing at the Quantum Technology laboratory (QT), Chalmers University of Technology and the Wallenberg Center for Quantum Technology (WACQT), Sweden.

NT acknowledges the European Commission for the Erasmus Mundus scholarship and Chalmers University of Technology and WACQT for the laboratory facilities.